Bass Lesson 19: Your Own Style

Your own style: when we were driving home after a performance with the Dutch Standards Quartet, my good friend Peter Massink said he thought I was an excellent bass player and that I had found my own style. ‘Nobody plays bass like you do’, he said. I considered that to be a huge compliment (especially because it came from him, I think Peter is a really fantastic saxophone player). As a jazz musician, we all want to develop our own unique sound and style, our very own voice and approach. In the past, Classic Fm broadcasted a jazz program every day in the Netherlands where I live. There was a quiz in this program; you would listen to a soloist for a few seconds and then had to guess who the soloist was. I knew the soloist frequently and won seven CD’s. It may be quite impressive that I won 7 CD’s in a short time, but even more impressive is the fact that these jazz musicians were so recognizable after I had heard them for five seconds, These musicians had a very distinct voice that enabled me to recognize them time and again.

How do you find your own voice and sound? The answer is very simple: just play the way you think is very beautiful. If you play the way you like best, you’ll play the way you think a bassist ought to play, and I can assure you that your way differs from the way that any other bassist in the world thinks is the best way. Every human being has a unique taste and so do you. So stop hiding yourself by choosing a sound that is not the sound that you really prefer. Coltrane had to endure a lot of criticism. Critics thought his tone was very thin and a little pathetic. But Coltrane just kept playing the way he thought best and after a while, more and more people understood he was a genius. Chet Baker had to endure the same criticism. I don’t think he bothered too much; he just sounded the way he wanted to sound.

Do you know the bass player Steve Swallow? I have to admit, I didn’t like his strange sound at all the first time I heard it. But this is a very distinct voice played by a very musical and unique bass player. Stanley Clarke, Jacco Pastorius and Dave Holland are very recognizable and unique bass players to. So just play the way you think is beautiful; they do the same. If you’re lucky, people will like what you play, but even if that’s not so, I still believe you have to remain true to your taste. The only way to remain true to your playing and to make sense as a musician, is to play exactly the way you want to play.

The same goes for the notes you play. There are a lot of opinions going round concerning the notes a bass player ought to play. As I have said in earlier lessons: as a bass player you’re free to play the notes you think are the best at any given moment. You do not have to be overly concerned with explaining the harmonies to the soloist while playing for instance. Nowadays the soloist is supposed to know the harmonies. This gives us the freedom to enrich the harmonies that are being played and to play exactly the way he think is best – although it is very useful to understand certain principles (see Bass Lesson 5, Walking Bass for instance). Still: find your own style!

When you’re learning to play the bass, you’ll probably meet people who assure you that it’s best to copy the way bass masters play bass. Of course, it’s a good idea to study and understand certain principles of bass playing – how can you learn the main rhythms otherwise? But I resist the idea that it’s a good thing to copy other musicians. There are way too much Charlie Parkers, John Coltranes, Miles Davis’s, Michael Breckers, Marcus Millers and Jacco Pastorius’s in the world. They are great musicians, I enjoy their playing very much, but one of them is quite enough. Maybe I was a bit too scared to be influenced too much, it is possible. But still: play your way as much as possible. I’m convinced it’s the only way. And who knows, maybe people will come to see you as the ultimate bass master! 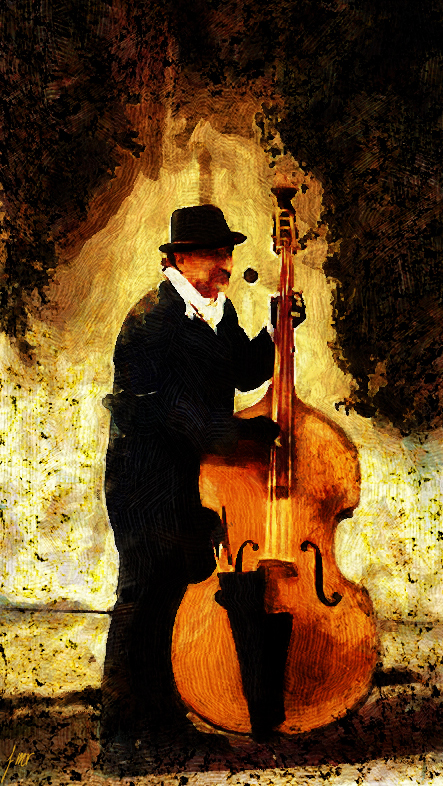 Christian McBride on developing your own sound